13 tips on how to generate ideas

Everything starts with an idea, but how to generate one?

Get inspired by these 13 tips. You can find these and more tips in Omar Mohout his book From Idea to Product/Market Fit. 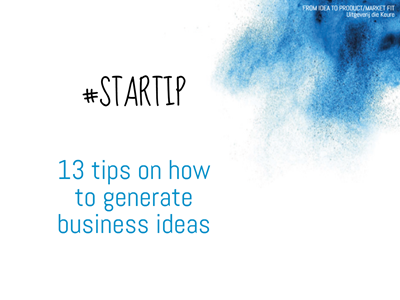 1. Living in the Future

Imagine you lived in the future and began identifying what is currently missing. Pay attention to early indicators of a changing context such as the arrival of electric cars, explosion of mobile technology, etc. Live in a future 10 years from now, then reduce the horizon to 5 years as a reality check. This will turn your mind to the leading edge of one technology or another.

Pay particular attention to things that bother you. Ask yourself “Why doesn’t somebody make ABC to solve XYZ?". That’s something I would buy immediately. You can find great business ideas right where you work. That’s what 50 % of the Inc. 500 Founders did.

Draw your inspiration from a successful idea, but improve it significantly or execute it better. A lack of originality and authenticity should not be a turn-off. However, just a small incremental improvement will not be sufficient. In the words of Guy Kawasaki: “Don’t stop at doing something better, do that particular something 10 times better. Jump to the next curve.”

TRIZ—The Theory of Inventive Problem-Solving—is a technology forecasting method based on analysing patterns of innovation. TRIZ assumes that problems and solutions are repeated across industries and sciences. Investigating the technology patterns across industries combined with breakthroughs in science can result in new products and services. Breakthrough technologies determine which problems companies can solve. More than 5 million patents were filed around the world last year, providing a wealth of information and insights.

Annual reports of public companies contain tons of interesting and accurate information. The reports show the risks and challenges a company faces; what’s working and what’s not. They also show a breakdown of budgets, so one can easily understand how money is spent; where companies are bleeding and; how their revenue is generated. By comparing key ratios with companies in the same industry, you can quickly point out where everyone is suffering and where some companies are under- or over-performing.

7. Apply a New Business Model to an Existing Idea

The “Fractional Horsepower” approach is to take a single feature of a big successful platform and turn it into a separate product. Think of Instagram taking the photo feature from Facebook, or Flickr starting as a game and then pivoting, based on one popular feature: image hosting.

Sometimes regulations are created to protect the market position of incumbents. In highly-regulated industries, you can find monopolies that are ripe for disruption. Textbook examples are Uber and AirBnB. Think also Apple Watch, Square and Angel List as disrupters. Same goes for the health industry. Drones and self-driving cars are for the time being in a regulatory grey area.

Innovation takes place at the edges, just like the melting of snow. Often new technologies look initially like toys, unable to fulfil the “serious”  needs of customers and users. But the underlying technology improves exponentially faster than users’ needs increase. It’s as if time in the technology industry moves in dog years—7 times faster— outpacing all other industries. Harvard professor Clayton Christensen gives many examples in his book “The Innovator’s Dilemma”; such as how telecoms companies viewed newcomer Skype as a “toy”. Other examples of “toys” that became mature technology include drones, apps, crypto currency and 3D printers.

11. Go and Network: The Collision Theory

Network, not for customer acquisition, but for ideas. Be open and inquisitive. Find out where people hang out in the domain or industry you want to tackle. Get close to companies targeting your market, but also seek out differences and new perspectives. Gather across boundaries and disciplines to meet people who can challenge your world view and teach you something new. It’s there that you can expose yourself to fresh ideas. All this can take place both offline and online. You might even bump into the person who will become your future cofounder

Any solution comes with a new—smaller—pain. The current solution of the customer might be “just good enough” or works only in combination with a semi-manual workaround. Imagine selling new software for corporate training programs. If you would call them Training Managers, the first thing they will answer is that they already have training software in place. At this point, you need to dive deeper into the subject, finding “new pains” that come with their current solution. You’ll be surprised how many times the “business owner” is frustrated with the use or non-use of certain solutions they implemented. Helping them maximise their current investment is worth investigating further.

Begin with lots of different ideas and end up discarding most of them. Use Occam’s Razor to select the one idea with the fewest assumptions, and make sure you stay in one domain. Keep only one idea to turn it into a great business. Throw everything in it. That’s how Glow, a fertility app, came into being. Max Levchin, member of the PayPal mafia, and his team were brainstorming about the health industry, looking for underinsured areas that were important yet not life-threatening. Idea after idea passed until they had their aha! moment and decided to go with fertility. 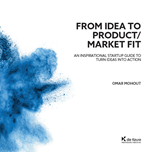